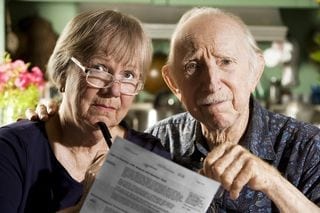 The husband and wife were found guilty, but not before they stole $1.2 million dollars from an elderly man with the beginnings of dementia. They could be spending the next 55 years behind bars.

A woman employed as a maid and her husband worked together with the goal of stealing millions from an elderly man.

According to WUSA9’s article, “Md. couple steals more than $1 million from man with dementia,” authorities reported that Ana Beti Molina began working as a maid for Gustave Shapiro in 2012. In the course of the next four years, she fooled her employer into opening joint bank accounts and giving her and her husband Javier Molina access to Shapiro’s fortune, reported to be worth $4 million before the thefts.

"She used a classic technique of isolation and separation of an elderly gentleman who was starting to degrade because of his dementia," said Ramon Korionoff, spokesperson for the Montgomery County State's Attorney Office.

In total, the couple stole $1.2 million of Shapiro’s money. Korionoff said they were able to use the money to finance their daughter’s college education, buy a SUV and a home.

Remarkably, the couple claimed in the trial, in their defense, that somehow buying an SUV was in the best interest of Mr. Shapiro.

Banking officials eventually questioned some of Mr. Shapiro’s finances. That query led to a subsequent investigation of the Molinas. The Shapiro’s attorney said the family was happy that the Molinas were caught.

“They're very relieved at the outcome today," said Attorney Heather Mehigan. "It’s been a very difficult few years for the family.”

Quick action by the state attorney’s office protected nearly $2 million of the estate, which was distributed to Shapiro’s real heirs. Mr. Shapiro died in 2016.