What is a Medicaid Annuity? 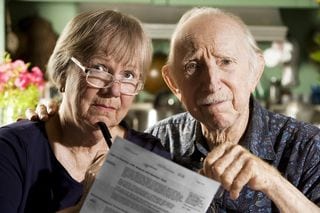 This financial product isn’t without some controversy.  However, it may be a smart move, when there are few or no alternatives.

It’s not an unusual scenario: one spouse has moved to live in a nursing home and will never be able to return home. There was no long-term care insurance in place, and the couple does not qualify for Medicaid. Medicare won’t cover the cost of the nursing home, and at $5,000 to $8,000 per month, the cost will quickly drain the couple’s retirement savings. Is there anything that can be done now?

In case you missed it, Kiplinger’s article from last fall, “Medicaid Annuities Help Protect Savings,” explains that a Medicaid-compliant annuity might rescue your retirement.

If you purchase an immediate annuity owned by and payable to you that meets several requirements, it will transform cash that would otherwise prevent your ill spouse from qualifying for Medicaid into an income stream that helps you to preserve your quality of life. With the annuity, Medicaid starts covering the nursing home expenses, and your monthly bills are manageable.

If you have the time to plan ahead, you can address these long-term-care costs, such as with long-term-care insurance or aggressively saving with the aim of self-insuring any long-term-care costs. However, for couples in crisis, who’re watching their life savings evaporate as they pay nursing-home bills, a Medicaid-compliant annuity may be the only way to preserve a livable income for the spouse who remains at home.

Medicaid recipients typically can’t have more than $2,000 in cash. When one spouse goes into a nursing home, and the other stays at home, there are some special rules that apply. The healthy spouse can keep a certain amount of assets, which varies by state.  However, it can be as much as roughly $120,000. The healthy spouse’s income isn’t counted when determining Medicaid eligibility. The Medicaid recipient must use his available income to pay for his care costs, but the healthy spouse can keep some or all of that income, if she otherwise would not have enough to live on.

Those trying to meet Medicaid’s asset limits can spend down their life savings, which gives the healthy spouse very little on which to live. They could also give away the money, which will mean there’s a period of Medicaid ineligibility, if the gift is made less than five years before applying for Medicaid. However, a properly structured Medicaid-compliant annuity can reduce the need for these drastic actions.

It’s important to note that some states want to limit their use. A bill introduced in Congress last year would count half of the income from a healthy spouse’s annuity, when determining the Medicaid eligibility of the institutionalized spouse. However, the bill didn’t get much traction.

You might consider a Medicaid-compliant annuity if you have moderate savings—perhaps $500,000 or less—and must pay for nursing home bills out-of-pocket. For those who are not in a crisis situation, these may not be the wisest investments. This is because they’re designed for people in dire straits. They generally offer minimal returns, such as 1%. Those with more wealth are much better off earning a market rate of return on their money and paying the nursing-home bills themselves.

Since you don’t want to tie up money that could be needed for other expenses, you should only purchase a Medicaid-compliant annuity when you know your spouse has moved to a facility permanently. The amount you should invest in the annuity is determined in part by your finances on the “snapshot date”—the date your spouse has spent 30 consecutive days in the facility.

Before going forward with a Medicaid annuity, sit down with an elder law attorney. The attorney will be able to help you determine whether a Medicaid annuity will help your situation. You will also need to update your estate plan and powers of attorney at this time.