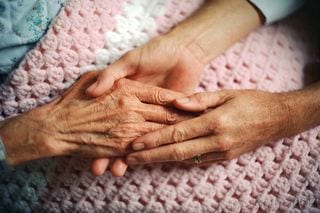 There are several different types of dementia. A new type of this disease has been revealed that may actually be more common than Alzheimer’s, at least among older adults.

This newly discovered form of dementia often has the same symptoms of Alzheimer’s disease, but progresses more slowly and has a different impact on the brain. This disease often occurs at the same time as Alzheimer’s, and when the two occur at the same time, the cognitive decline is far swifter than either type of dementia alone.

CNN’s article, “Doctors newly define another type of dementia, sometimes mistaken for Alzheimer's,” says that in developing the recent report for Brain, the international team of authors is hoping to spur research and treatments for a disease that tends to affect people over 80 and "has an expanding but under-recognized impact on public health," according to the paper.

The evidence has been growing for years. There are reports of patients who didn't quite fit the mold for known types of dementia, such as Alzheimer's. Experts say that heterogeneity has complicated dementia research, including Alzheimer's, because it hasn't always been clear what the root cause was and if doctors were treating the right thing.

The acronym LATE stands for Limbic-Predominant Age-Related TDP-43 Encephalopathy. The full name refers to the area in the brain most likely to be impacted and the protein at the center of it all.

More than ten years ago, doctors first linked the TDP protein to amyotrophic lateral sclerosis, otherwise known as ALS or Lou Gehrig's disease. It was also linked to another type of dementia, called frontotemporal lobar degeneration.

Based on autopsy studies, the new paper estimates that between 20 and 50% of people over 80 will have brain changes associated with LATE. The prevalence increases with age.

New guidelines could have an impact on Alzheimer's research, as experts say some high-profile drug trials may have suffered as a result of some patients having unidentified LATE—and thus not responding to treatment.

Advances in testing had already proven that some patients in these trials lacked "the telltale signs of Alzheimer's.”

Scientists are hoping that research with large, diverse groups of patients may be able to help understand and address the disease, now that it has been defined.